Rhizomatiks in Mexico, the apotheosis of a future world

Like if it were a preview to a Kabuki show, the Covarrubias Theatre of UNAM (National Autonomous University of Mexico), lingers in complete silence. In a half-lighted stage silhouettes of what can be devised as mecha-like sculptures gloom from behind; at front, white cubes.

A hip hop mix sets the tone and four pairs of white legs are revealed from the back of the cubes. The now –perfectly videomapping-streamlined silhouettes, shine off the choreographic rythm of Elevenplay, dance group of Rhizomatiks,  the multimedia creative project of visual artist, Daito Manabe and Motoi Ishibashi, now as a collective visiting once again the country, as part of the Festival Internacional Cervantino, Danza UNAM and Festival Mutek programmes.

Both tokyoites, installed with theirs laptops in the rear control cabin, shoot off cues for a real-time programmed multimedia illumination, videomapping, animation and motion graphics that integrates the dance performance/ instalation. The japanese technological singularity claims its place in this truely contemporary show, digital arts vanguardwise, but also what is for the transdisciplinary remediation techniques and the postdramatic.

Little by little the japanese women fill the stage with movements that resembles somewhat of the military nippon public gymnastic sets to the Bauhaus Triadisches Ballet, replicating the programming of the visuals over the full-white-fledged canvas-like costumes, in which an interactive visual narrative develops encompassing motion and animated graphics. 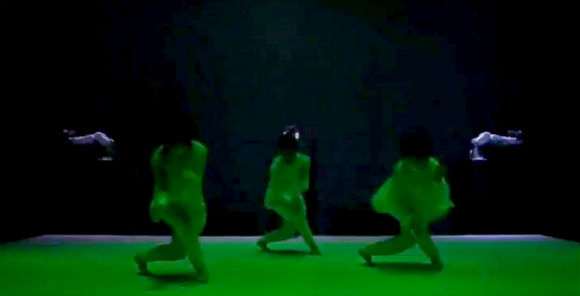 The dancers now rearrange the cubes in diagonal, following a minimalistic dynamic, evolving from scenic interplay to plastic scenes, like in an Anime cover. Nine girls take positions that recalls motifs of the shosagoto, the dance branch of kabuki, of butô and j-pop choreographies soft-dyed with contemporary dance techniques. Evidently, their proposal is one of the current Tokyo social imaginary re-appropriation: hyper-mediatized commercial posters, in a choreographic transition interacting with the other elements.

All of a sudden, the human tetris is choreographed now by lasers floor pin-pointing by a set of three robo-arms unveiled in the back; they are now the masters of humankind that burns itself off to their directions onstage. Inbetween the rays, bodies flee and dodge, like if a hollywood spy mission flick set in, to end in a beautiful digital robot-body-laser-movement interaction, a mecha-nic ballet, the herald of the japanese zeitgeist synthesized in the plastics of movement and detention across neon rays.

Again complete darkness, little pyramids lay below three astringent stewardesses in full white; they start the rite of the future, summoning with her arms rising to the skies, the tiny drones flight encompassing their hands, the man-machine apotheosis has begun. 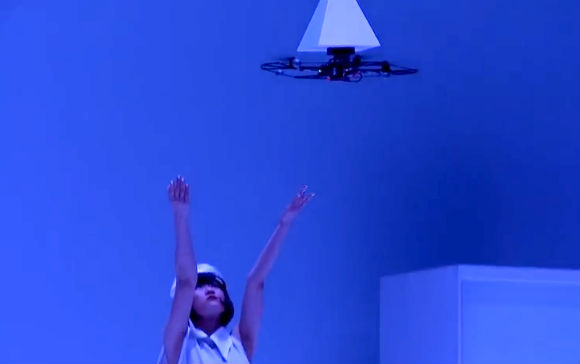