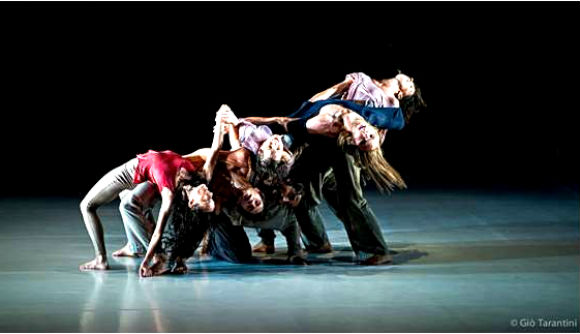 A gust of fumes, underground, crowds, opening doors, beep, theater, handshakes, silence: the fog machine mists up the black horizon.
Behind a stage mesh dancer silouhettes are drawn, that join trotting in the infinte loop of life. Some keeping the same pace, others running till exhaustion. Bit by bit a a mass of moving bodies are revealed, vigorous, built, thick, fleshy, synchronous.
Splattered by sweat and life filth their faces, summon the mortality from which we all take a share.
Conventions set, like puppets enchanted by their rythm, we follow bodies back and forth, attached by strings invisible. Us, being with them.  Sharon Fridman company is onstage: today as part of the XXIX Madrid en Danza 2014 festival programme, that in this special occasion showcase the madrilenian emergent artists, from the 6th to 30th November.
The contact kinetiks in Sharon’s Free Fall choreography, tries to manifest the current bodies attraction innate inertia that we keep on experiencing everyday, in that point called instinct, at which we all find each other face to face, enduring a survival law, that goes beyond biologic transcendence, the former at which we find essence, the one that gathers us and splits us, with other souls, other bodies.
We recognize through the mist of souls armada, other hands, arms, which we pull, push, balance, deject, eject from one to another, to face one another, other shoulders, legs and feet, in which we find shelter, linger, and with them, wander. In the search of balance, female bodies emerge, one, two and three, held by their men, knights errant of the human sea, kings and queens, that gaze the horizon, conquering the panorama at which they lunge. The humankind pride, the one which man gives his life for.
In a push and pull, fighting, gasping, pain takes over a mass of bodies that become shoal, limbs  standing on each other, leaning on each other, slowly betray one another, throw back any other. Fight carries on, into animality, on to get other’s sovereignity.
The mortal pendulous loop of human life reestablishes itself, bodies running in a circle full of flesh and sweat, breaths exhale in the multitud of mouths. The bodies come down a light jog, finally exhausted, they stop and turn themselves to the shining eyes that stare steady from the darkness. Our eyes find each other, we are now too, part of the zombies army.
*Sharon Fridman company, performed on 29 and 30 November 2014, in the Red Room of Teatros del Canal, Madrid as a part of the XXIX Madrid en Danza festival programme.