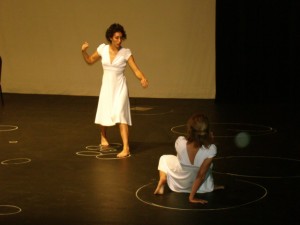 END_OF_DOCUMENT_TOKEN_TO_BE_REPLACED

On 2007 she travels to Santiago de Chile, where she studies Comedy of Art with the Clown Oscar Zimmerman and movement technique with choreographer Alejandro Caserés at Universidad Diego Portales. She takes part as a foreign student at Centro de Danza Espiral, school of the well-known Chilean choreographer Patricio Bunster. In that same country, she created in collaboration with choreographer Rafael Silva the choreography “After you”, performed at Centro de Arte Niminku. On 2008 she travels to Santa Clara, Cuba with the Company of theater Viento de Agua, presenting the play “ Do not cry” from director Boris Villar in the Festival Magdalena project: without borders coordinated by the actress from the Odin Theater, Julia Varley.

She has participated in site specific projects “La Noria” and “Link” from the artist Alicia Marván and Zap MacConell inside the International Festival Pérformatica: Foro de Artes en movimiento. That same year she performs on the piece “He doesn´t like the way I dance” from A to Z part II (scholarship Foescap, Puebla) from the choreographer Mayra Morales. She made an audition at Folkwang-Huchsule at Essen, Germany and at MA on choreography and Performance at Institute of Applied Theater Studies Justus Lieblig University of Gissen (ATW) in cooperation with the HFMDK Frankfurt Hessian Theater Academy Network Germany where she presented the solo-performance “Instructions to fly”.

She has taken workshops of Release Technique at The Place in London and workshops with Angelique Wilkie, Rosas Repertory with Samantha Wan Wissen, Trisha Brown Repertory- Glacial Decoy with Selley Senter among others at the Impulstanz Festival in Vienna during summer of the same year. When she comes back she received a Scholarship of Cultural Studies from the Government of the State of Oaxaca, México; to conclude her final project for the thesis “Polvo Somos: an approach to the daily of no-marriage”. She was part of the academicals program inside the Festival International Lila López at San Luis Potosí, México presenting a collaborative performance.

In 2009, she gives a workshop of Coral Dances for children’s at the Interdisciplinary Residence in Art and Ecology Guapamacátaro from the artist Alicia Marván. She traveled to France and Belgium, been invited to the audition at E.X.E.R.C.E 09/10 with the choreographer Mathilde Monnier, working in a project of videodance with films maker Juan Diosdado and the photographer Marie Ozanne in París. She co-directed with Ximena Monroy, Play 09: Cycle of Videodance in the MIDO: Muestra Internacional de Danza Oaxaca, México. She participated in the 3º Foro Pérformatica Puebla City. She presented a solo-performance “Note of Silence” in PRISMA forum at the CENART: Centro Nacional de las Artes at México City.