Dance Exhibition as Retrospective, as Pilgrimage: A Review of «Work/Travail/Arbeid» 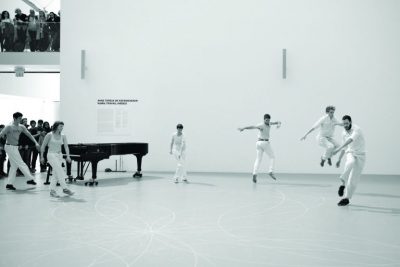 Retrospectives in dance and choreography are fashionable now, partly because of the increasing numbers of visual arts institutions presenting dance. While the exodus of dance from the stage to the gallery is related to economic concerns for both artists and institutions, the presentation modes of retrospectives have more to do with increasing the vantage points from which dance and dance artists’ trajectories can be viewed. Since the museums invite well-established figures, retrospectives for choreographers can move beyond simply canonizing them. They offer these artists opportunities to develop new channels of receiving dance and choreography in expanded time and space. While I am brutally simplifying the complexity of discussions around this trend, experimentation with presenting dance was very much informing Belgian choreographer Anne Teresa De Keersmaeker’s Work/Travail/Arbeid, presented at MoMA’s Marron Atrium for five days between March 29th and April 2nd, 2017.

Grisey’s Vortex Temporum (1996), an exceptional piece of contemporary music, is a forty-minute score for piano, flute, clarinet, violin, viola, and cello. ATDK’s choreography to the score investigates the choreographic counterparts of the various temporalities and tonalities that Grisey experiments with. Although the movement does not mimic or describe the sound directly, the choreographer assigns one dancer/movement score to each musician/instrument, in order to investigate closely how Grisey’s composition combines the idiosyncratic rhythms and timbres of the sextet. Such close correspondence with music is ATDK’s artistic signature. Her Fase: Four Movements to the Music of Steve Reich is the definitive example of this relationship, which she developed as early as 1982 when she was a student at the Tisch school in New York. Grisey’s experiments with spectralism, a compositional approach that uses divergent harmonies based on mathematics and computation, align with ATDK’s interest in sacred geometry and ritualistic spatial patterns. What bridges the two are the elemental gestures embodied by the unique movement qualities of the members of Rosas, ATDK’s company.

Work/Travail/Arbeid layers several music-movement combinations, extracting different instruments and movement scores from the original compositions each hour, such that different details from the same compositions become available for closer scrutiny. Although seeing Vortex Temporum’s choreography in the museum offers a performance experience in itself, Work/Arbeid/Travail gains an analytical valence as one stays with the piece for longer. This is the exuberant opportunity that ATDK galvanizes in the visual art context: the luxury to see the “work” over and over in one go, witnessing different layers of it, from multiple vertical or horizontal points in space. The pedagogical value of this is incomparable to any other attempt to increase dance literacy.

In my reading, the “work” in the title referred to the working of a performer/performance as well as the effort involved in navigating the complexity of other bodies and noises in the space, both on the performers’ and the audience’s part. From WIELS to Centre Pompidou to Tate Modern, Work/Arbeid/Travail took different shapes in relation to visitors and the available space. At MoMA, it was challenging to focus on these pared-down choreographies on a Saturday afternoon, with the irregular flows of museum visitors and various noises from the upper and lower levels flooding the dubious acoustics of the atrium. An atrium is a reservoir, not a vortex, and for quite a while my sight was arrested by anyone but the dancers. Attuning oneself to ATDK’s work takes some work in any case; here, it required deliberate labor. Once I accepted staying with this sense of cacophony—racing strollers, hyperactive children, countless selfies, endless gossip—I started to view the dancers as big human erasers. They moved in big sweeping circles in their white costumes, almost as if they were clearing this visual mess. With sound, it took more time to take in. Maybe in time I began to take in the work synaesthetically, as it is intended in the choreography, or maybe the combination of all the layers and the ensemble at the final hour presided over the disorder. Perhaps, for the audience, it wasn’t only a learning experience of this particular score (or ATDK’s choreographic principles), but learning, through repetition, how to watch any choreography in such a context.

Dancers are trained to negotiate sudden and random changes in space, mass, and movement. Rosas dancers seemed to be in a trance, even as they were simultaneously highly aware of the hurdles around them. The musicians, however, must have had to learn to move along the interlacing circles on the floor and to avoid bumping into the audience members sitting inside those paths. Technically everyone is free to move around, but there were some audience members who took the invitation to take a closer look a bit too literally—adamantly rooting themselves at the centre of the action, presumably because they saw something others didn’t. Or perhaps there was some narcissism involved, a desire to be visible to others in the audience. Unlike other “performance art” shows, however, ATDK’s choreography is never about banking on the “experience” of proximity to the charismatic performers, though Rosas has a huge roster of them. Bringing a black-box piece into the midst of visitors offers them the chance to see and listen to it more closely, yet the geometric ideas ATDK is working with demands that the audience actively experiment with how they position themselves as viewers, within each cycle as well as across them. Watching the last quarter of a cycle with four dancers from the passageways on the third floor, for instance, delivered the sense of “working in the fields together” that ATDK was talking about in her lecture. The difference between sitting and standing in the same spot was vast. Unquestionably, we had to work our body to gain a sense of Work. What better intervention at MoMA—a marketplace of art and a tourist spot—than a swarm of movements that don’t have anything to do with aesthetics? The morning of the last day was a sort of pilgrimage: similar faces in the audience from the days before, smiling knowingly, habituated to sitting or standing for long durations, focusing, clearing the space, warning the newcomers about the lines they were encroaching. Were we drawn there again to “retro-spect” the piece? Watching the dancers in their collective motion, or in motions of collectivity like walking and running together, in synchrony and in sequence, trained us to watch them as a collective ourselves. For better or worse, watching Work/Travail/Arbeid essentially meant watching and tuning in to other bodies; bodies graceful, untrained, disoriented, supple, firm, generous, curious, hesitant, open, energetic, fatigued, calm.

These different senses of collectivity form an interesting counterpoint to Vortex Temporum’s dramaturgical resonances. The black-box piece, which ends in the darker and prolonged notes of the musical composition, gave me the impression of something collapsing or drowning, sinking deeper into a vortex. I could not help but feel the political reality we inhabit as a backdrop. But Work/Travail/Arbeid still “works” and breathes when the force that held all the musical and choreographic elements together is removed. The ending of each cycle is a release of energy, rather than its exhaustion. It heralds the renewal to come, very uncathartically, but very connected to the cyclical nature of life. I would even say, risking a cliché, that Work/Travail/Arbeid reveals the feminine energy that informed the original choreography, with its evocations of agricultural rituals, lunar phases, and “touching” relations between bodies that are rarely in direct contact. It evokes the femininity that one can always find subtly placed at the core of ATDK’s work.

Work/Travail/Arbeid establishes a new protocol in how choreography can be presented as an exhibition and retrospective. It was an absolute privilege for New Yorkers to watch these two pieces within months of one another, and those who couldn’t enjoy the opportunity are in for a treat with another ATDK piece no later than next season, when ATDK will be sculpting movement to John Coltrane’s A Love Supreme in collaboration with the Spanish dancer and choreographer, Salva Sanchis. Legendary music thus meets legendary choreography.